Who Are DIS Students?

DIS is experiencing changes due to COVID-19

As a result of COVID-19, DIS is experiencing significant changes to the resident populations of its kollegiums, as we currently do not have students from US colleges. We anticipate that they will be back at the kollegiums by the Fall of 2020.

Our students are typically between 19 and 21 years old and study at universities in North America. As part of their bachelor education, they choose to study for a semester (four months) with DIS in Denmark.

Most of our students are highly ambitious in their academic pursuits in Denmark, and many therefore are busy every day with their studies, hobbies/interests, and sightseeing.

Our Students Are Diverse

Our students come primarily from North American universities and the large majority of them identify as female (75%).

Most DIS students are American citizens, but about 10% are from other countries (such as China, England, India, Kenya, Ghana, Japan, Bahamas, Pakistan, and Korea).

In addition to ethnic and national diversity, there are also differences between the students’ economic backgrounds. For example, some of our students are the first in their families to attend university, while others come from upper-middle class or upper class families in their home countries. This means that there can be a large discrepancy between how many resources students bring with them for their time in Denmark.

In an aim to create an enriching learning environment for all students, DIS is constantly working to attract a diverse student population.
DIS prioritizes ensuring our support systems for students appeal to a wide array of diverse identities. We do this not only by collaborating with relevant local organizations but also with specific diversity training of employees.

It is becoming more customary in the U.S. for people to ask that other gender pronouns than ‘he’ and ‘she’ are used when speaking to them. For example, more people now prefer to use ‘they/them/their’ pronouns. These students will often identify themselves as ‘non-binary’ and prefer that other pronouns (like ‘they’) are used when talking to – or about – them, while other students might prefer to be exclusively identified and addressed by their names.

At many American universities, it is now typical for people to share this information when they meet new people. This practice ensures that everyone, no matter their gender identity, feels they are recognized and respected for who they are. To accommodate this and ensure all students feel they are welcome, DIS has begun asking students which pronouns they prefer.

A bachelor education in the U.S. is four years. Depending on which year you are currently studying, students will call themselves freshman, sophomore, junior, or senior. In the U.S., students must choose a main field of study (major) and a secondary field (minor), which they focus on during their studies.

Most DIS students come from so-called ‘Liberal Arts Colleges,’ which are small universities of about 1000-2500 students, focusing primarily on the development of broad knowledge rather than concrete skills. For example, courses in religion, philosophy, literature, and sociology are often required courses for all students – no matter their major/minor.

During a bachelor degree in the U.S., students must obtain 120 ‘credits.’ Students can earn 15 of these points during a semester with DIS (five courses with three weekly sessions for 15 week = 15 credits).

Grades are an important aspect of the American educational system. Most DIS students often have a high grade level: for the past few years, most of our students have had an average of B+ (which is similar to 3,4 out of 4).

Most students hope to uphold their grade levels from home while studying abroad. 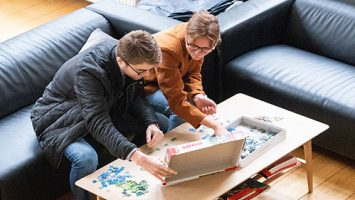